This show is closed. Stay tuned for the 2019 One-Act Play series announcement. 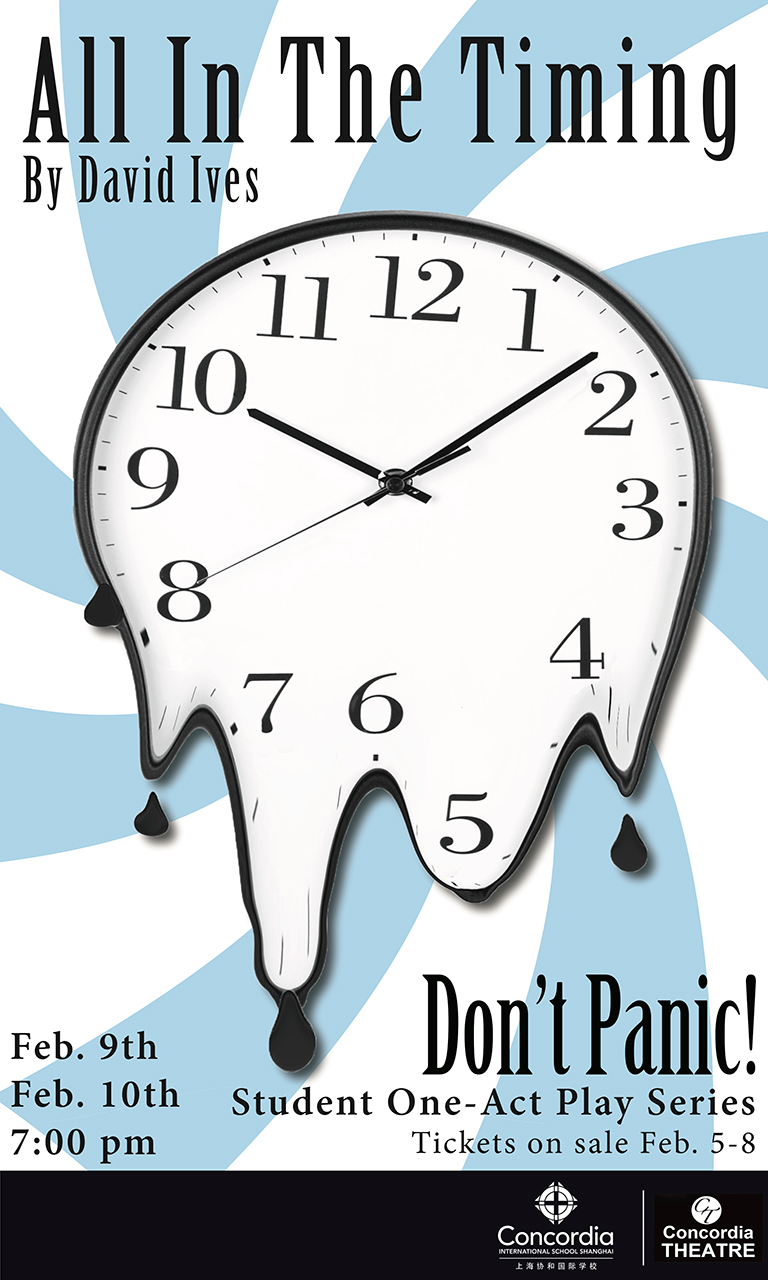 The idea for the Winter One-Act plays began when four theatre students, Luke Miller, Harper Lagares, Iris Kim and Angela Wang, voiced an interested in directing their own shows. The Theatre quintet, officers of the International Thespian Society, poured through a fountain of options, eventually opting for David Ives’ masterpiece of comedic romp-ery. Open auditions for the high school student body quickly resulted in a talented cast eager to show their stuff to audiences thirsty for comedy with a bite. Winner of the John Gassner Playwriting Award, Ives’ All in the Timing is a critically acclaimed, award-winning evening of comedies combining wit, intellect, satire and just plain fun. Indeed, Mr. Ives’ mash-up of clever, cynical (and somewhat sinister) humor has resulted in his short canon of comedies to be one of the most widely produced plays in the world of high school theatre.

Tickets go on sale Feb. 5 through 8 in the PC commons during lunch and after school. Cost- 50 rmb, both adults and students.

All in the Timing and Perfect will be presented in the Rittmann Theatre Feb. 9 & 10 with curtain up at 7:00pm. The six shows combined run approximately two hours and are appropriate for all ages, though most enjoyed by those 12 years and up. There will be one 15-minute intermission. Concessions will be served in the PC Commons. Doors to the theatre will open at 6:40pm. Electronics (phones, cameras, video recorders), are not permitted in the theatre at any time. Photos may be taken in the theatre lobby after the show.

SURE THING directed by Iris Kim. Two people meet in a cafe and find their way through a conversational minefield as an offstage bell interrupts their false starts, gaffes, and faux pas on the way to falling in love.

WORDS, WORDS, WORDS directed by Mr. Doering, recalls the philosophical adage that three monkeys typing into infinity will sooner or later produce Hamlet and asks: “What would monkeys talk about at their typewriters?”

PHILIP GLASS BUYS A LOAF OF BREAD directed by Angela Wang is a parodic musical vignette in trademark Glassian style, with the celebrated composer having a moment of existential crisis in a bakery.

THE PHILADELPHIA directed by Harper Lagares presents a young woman in a restaurant who has fallen into "a Philadelphia," a Twilight Zone-like state in which she cannot get anything she asks for.

VARIATIONS ON THE DEATH OF TROTSKY directed by Luke Miller shows us the Russian revolutionary on the day of his demise, desperately trying to cope with the mountain-climber's axe he's discovered in his head.

PERFECT, a satire written by Mr. Doering and conceived by the 2012 APAC Theatre Ensemble, explores the idea of Perfection through the eyes of two imperfect humans as they stumble across a failing Oracle. The uncooperative see-ers inadvertently call upon an unforgiving Goddess, (in the middle of a facial), leading to a confrontation between a mythical ideal and the reality that in our search for perfection is the very flaw that makes us Human. Perfect.